It is quite common for a patient to have a CT or MRI for an indication such as headache or dizziness and for the scan to demonstrate a lesion which is likely to be a meningioma. Often these are incidental, that is, there is no association between the meningioma and the symptoms. Incidental meningiomas usually require no treatment but depending on the age of the patient and other factors such as the size of the meningioma, follow-up imaging may be advisable.

While histology is the only way to confirm the diagnosis, meningiomas have a characteristic imaging appearance and therefore a reasonably accurate diagnosis can normally be made on CT and/or MRI. Incidental tumours are usually small (<2cm) in diameter and based along the dura. They avidly and uniformly enhance. They may be heavily calcified especially in the elderly patient; hence the term ‘brain rock’. 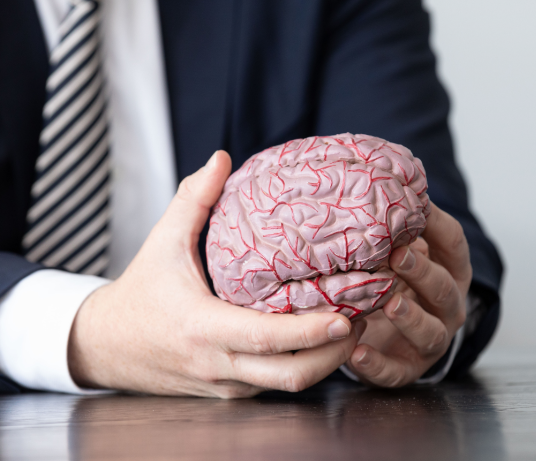 Other tumours may also mimic meningiomas. Of particular concern is metastatic disease; most commonly melanoma or carcinoma of the breast, that may present with dural-based enhancing lesions. In patients with a history of metastatic disease, histological confirmation of the diagnosis may be necessary. 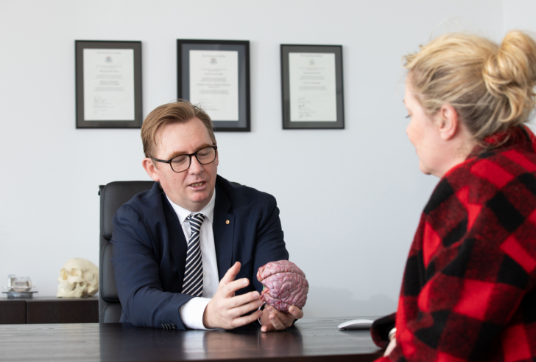 What are the indications for treatment?

Large or symptomatic meningiomas should also be considered for treatment. Meningiomas that grow can cause a range of symptoms depending on the location. They may cause neurological deficits such as weakness, personality or memory changes. Occasionally they will cause seizures. Most commonly meningiomas cause headache due to elevated pressure within the cranium.

Asymptomatic meningiomas that exhibit growth should be considered for treatment. Tumours that grow more rapidly may sometimes be atypical (WHO grade II) meningiomas that are also characterised by a higher rate of post-operative recurrence.

What are the options for the treatment of meningiomas?

The mainstay of treatment for meningiomas remains surgical resection. This normally involves a craniotomy to access the tumour and remove it. An intraoperative image guidance system is almost always used for these surgeries. They allow a surgeon to map the exact site of the tumour so that the incision can be placed directly over the tumour, meaning that the incision can often be smaller. Larger tumours will often need larger craniotomies, but can usually be removed safely with minimal morbidity.

However, meningiomas in deeper regions that involve cranial nerves and/or encase arteries at the base of the brain may require more complex surgery which is sometimes combined with radiotherapy. An example is cavernous sinus meningiomas where surgery may still have a role in de-bulking large tumours, but complete resection may not be possible without very high risk of morbidity. In such cases, fractionated stereotactic radiotherapy may be considered.

Increasingly, endoscopic transnasal transsphenoidal / transethmoidal approaches are being used for meningiomas of the anterior skull base. This is normally performed in conjunction with an ENT surgeon skilled in endoscopic skull-based techniques. This approach can be performed without surgical scars and therefore may have lower morbidity.

While surgery remains the main treatment for meningiomas, stereotactic radiotherapy or radiosurgery can also be used with small tumours as the primary treatment. This may be a reasonable option for patients with meningiomas located in regions where the operative risk is higher, or in whom co-morbidities elevate peri-operative risk.

To learn more about treatment for meningioma  click on  the following link:

What follow-up is needed after removal of a meningioma?

Following surgery, the patient is normally reviewed by Prof Owler after 6 weeks to check on their recovery. At that time the plans for follow-up and surveillance are also discussed.

Meningiomas are classified histologically according to WHO criteria. The most common meningioma is WHO grade I (about 80%). With complete excision, including the dural origin, the risk of recurrence is low. However radiological surveillance with annual MRI scans for the first five years with biannual MRI scans, thereafter, is still recommended.

Approximately 15- 20% of meningiomas are atypical or WHO grade II tumours. These have a higher rate of recurrence. Consideration to post-operative radiotherapy should be given in these cases. Patients with atypical meningiomas will need closer surveillance with 6-monthly MRI scans for the first 5 years and then annual MRI scans thereafter. It is rare for meningiomas to be malignant or grade III meningiomas (1-4%).

Professor Brian Owler is a highly respected Australian trained and Sydney based neurosurgeon, caring for people with neurosurgical conditions affecting their spine or brain.